Also known as acceleration-deceleration injury of the neck, whiplash is most commonly associated with auto-related accidents. A rapid and sudden hypertension of the cervical spine due to an impact from behind can result in injury to muscles, tendons, ligaments, disks and other structures.

Muscle spasms as well as pain will occur due to the high activation of muscle spindles. These proprioceptors are sensitive to the rate of change in the length of a muscle, in the case of whiplash, rapid lengthening.

Common cervical muscles involved in whiplash may include: 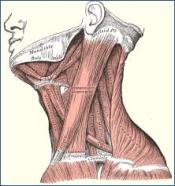 Once trigger-points develop, the patient may report referral pain moving down either arm, numbness and tingling in the extremities and headache. Additionally, muscles of the thoracic and lumbar regions will be effected by whiplash such as the rhomboids, quadratus lumborum, multifidi and rotatores.

As with any severe injury, a physician will direct the plan of care. Treatment is warranted after the acute phase of the injury has passed and the patient has been examined for fractures, disk deviations and nerve impingement.